With an amazing cast and a gripping plot, Money Heist has definitely won over audiences and critics alike around the world. The masked robbers attempt to pull off the greatest heist of all time.

Professor aka Salvador “Salva” Martín is the mastermind of all this heist and all plans were made by him. He assembled the team to execute his plan. Here are the best Money Heist quotes by Professor.

When someone is in love, they look through rose-tinted glasses. Everything’s wonderful. They transform into a soft teddy bear that’s smiling all the time.

Raquel Murillo: ‘How long did it take to study every move we make, each time?’The Professor: ‘To be honest – half my life.’

The second any blood is shed, we’ll no longer be Robin Hood, but just a bunch of plain motherfucking punks. 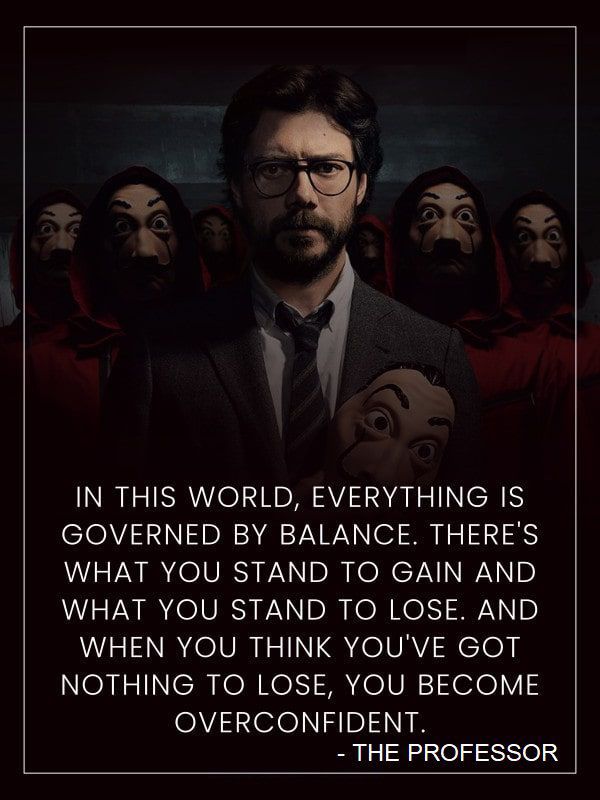 Berlin is a jewel thief and the brother of Professor and his second-in-command. The following are the few best Money Heist quotes by Berlin.

The first times are so special. Unique. But the last times are beyond comparison. They are priceless. But people don’t normally know it’s their last time.

Because someday, something will go wrong, I could cost you your life or something worse. And on that day what you can’t be thinking is that you are to be blamed for something you couldn’t control. That’s life. Enjoy it. until the party is over.

Love can’t be timed. It has to be lived.

I’ve spent my life being a bit of a son of a bitch, but today I think I want to die with dignity.

We are all going to die. And I drink to that because we are still alive. Here’s to life.

Ethics is important, Nairobi, but aesthetics as well. 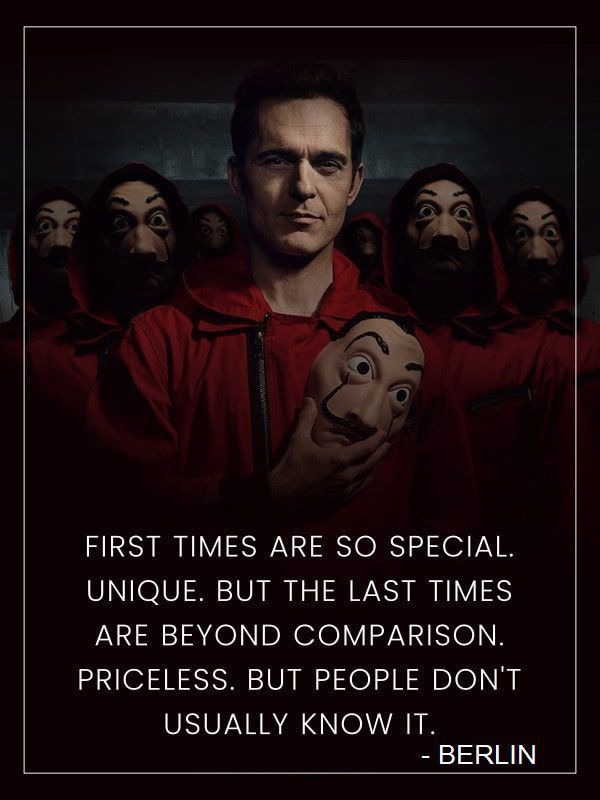 Tokyo was a runaway robber until recruited by the Professor to participate in his plan. Here are the best Money Heist quotes by Tokyo.

Happiness is like lightning, blink and you miss it. After that came the fall. When you reach heaven the fall is devastating.

Paradise is wonderful when your life is dull and full of traffic. As an escape every now and then.

I can behave like a proper girl for a long time, but little by little, the naughty girl inside of me starts to take over.

There are moments in life we should just be able to have a damn remote control, so you could pause it. Even if just for five minutes. But sometimes things happen with irreverent obscenity and there’s nothing you can do to help it.

After all, what’s more human than the fight for survival?

When you hit rock-bottom, you still have a way to go until the abyss.

Have you ever thought that if you can go back in time, you might still make the same decisions? We all make our own snowballs out of our bad decisions. Balls that become massive, like the Indiana Jones boulder, chasing you down-hill only to crush you in the end.

In the end, love is a good reason for everything to fall apart.

The bullet of an M16 shoots out at 2100 miles per hour. Faster than the speed of sound. So if they shot you in the heart, you won’t even hear the bullet that killed you.

A woman can spend two days choosing shoes for a wedding. But wouldn’t spend a minute arguing over masks for a robbery.

And that’s how I met The Professor, by pointing a gun at his balls. The good thing about relationships is that we end up forgetting how they started. 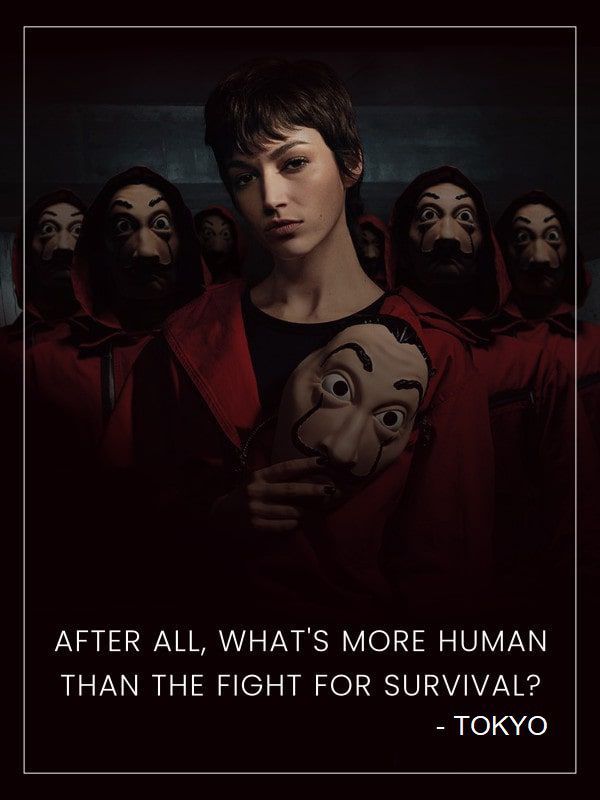 Nairobi is an expert in forgery and she is in charge of printing the money for the group. The following are La Casa de Papel quotes by Nairobi.

You don’t love anyone? Of course, you don’t, darling. You don’t have the balls for it. To love, you need courage.

Are you a complete idiot or what? You’ve heard of Stockholm-Syndrom, right?

What you have to do is make those suckers see what you’re capable of. Show them you’re not scared.

To love, you need courage. 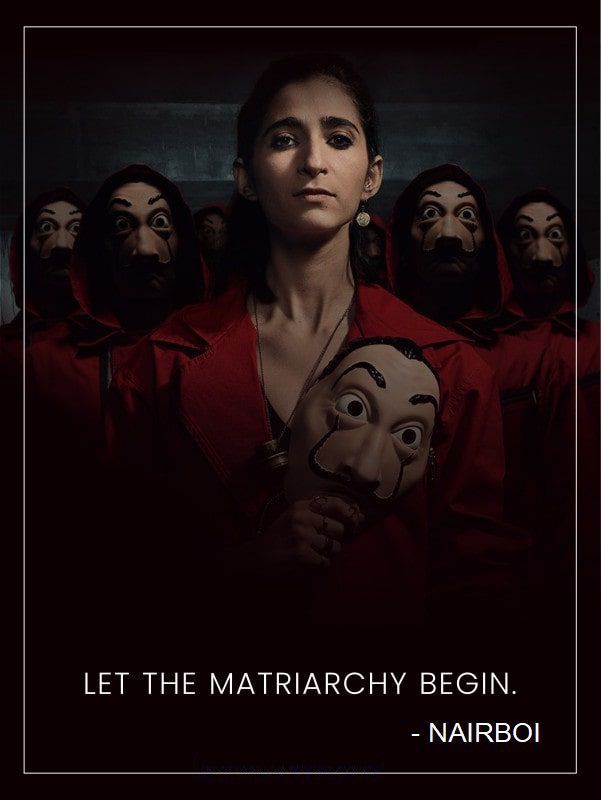 Rio is a young hacker and the boyfriend of Tokyo. Here are the best La Casa de Papel Quotes by Rio.

You may be completely fucking nuts, Helsi, but you’re a big softy.

When I see you walking around here, my heart pounds, just knowing you’re near me. Our s*x makes me float around the room.